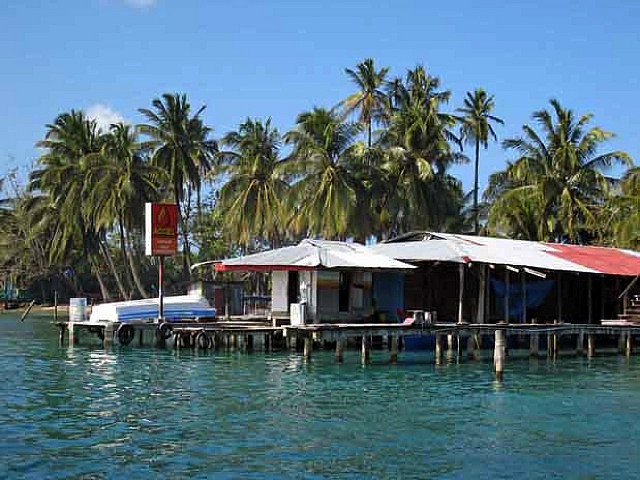 We’re putting Panama in the spotlight this week. Sometimes found in the shadow of other Central American countries, this unique and intriguing destination has a glow all its own and deserves to be celebrated. 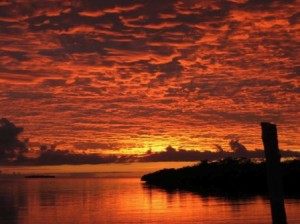 Speaking of celebrations…the Carnival of Panama (also known as King Momo’s party) recently took place. Each year, in the four days leading up to Ash Wednesday, the cultural festivities come alive – complete with night parades, elaborate costumes, dance festivals and musical groups, along avenues and in city squares. If you are an advanced planner, you might want to consider this for your next February travels. 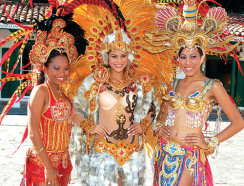 Albeit a spectacular display of cultural pageantry, if glitzy festivity is not your thing, the remarkable natural beauty and assortment of adventurous opportunities in Panama might catch your attention more. Slightly smaller than the U.S. state of South Carolina and hugged by the Caribbean and Pacific coasts, there is an astounding amount of diversity to be found in Panama. Not only does Panama City have the largest urban population in Central America, much of the country’s flora and fauna cannot be found anywhere else in the world. 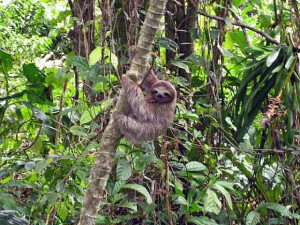 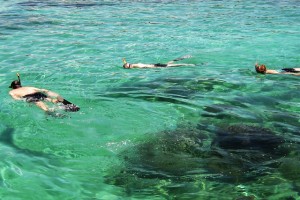 als, or on a snorkeling expedition, spotting vibrant tropical fish, there is no shortage of wildlife viewing in Panama.

As always, the activity level of your adventure is entirely up to you. With some of the best eco-lodges around, you can wake up surrounded by the sounds of life in a tropical rainforest or with waves lapping the shores. Get out there and do something active, or enjoy unsurpassed hammock views and unwind, knowing that tomorrow is another day in paradise.

Finding Green in the South of Mexico

We were invited by the Rainforest Alliance on a trip to the south of Mexico to learn about the sustainable lodging program they are developing on the Yucatan Peninsula.
As you may already know, Rainforest Allianceâ€™s vision is to conserve biodiversity and ensure sustainable livelihoods by transforming land-use practices, business practices and consumer behavior. GreenSpot.travel has been involved with Rainforest Alliance since 2007, and has found the alliance a powerful one, which allows us to be able to make a contribution to â€œchangeâ€ in the tourism niche.

Day 1
When I decided to sign up for the FAM (familiarization trip) in Mexico, I hesitated a bit to accept, because of the fear to get the H1N1 flu.
I finally decided to come and Iâ€™m glad I did, as I realized the negative impact that some news could have on any region, when sometimes the reality of the issue is another one.Â
We arrived in Cancun where the group was waiting for us. We were introduced to Barbara Derks, General Manager at Ixcanan Travel, Whitney Cooper, Center for Responsible Travel, Annett Pompner, Tourismus Schiegg, and Mariana and Carlos, destinostv.com.Â  That was our group!
We headed to Holbox Island, where the Caribbean Sea and Gulf of Mexico converge, where the whale shark comes to eat (July-August), where tons of pink flamingos arrive, and where we would see the turquoise waters of the Caribbean and white-sand beaches. The drive from Cancun to Chiquila was approximately 2 hours, and along the drive we started to break the ice in the group and it seemed like it was the perfect one to be in.

Once at Chiquila, the boat was waiting for us to take us to the beautiful Holbox Island, a 25 minute ride. I was so impressed by the color of the water that I felt like jumping in it at once and forget my fear of the oceanâ€¦

We arrived at Villas Paraiso del Mar, our home for the first night in the Yucatan Peninsula. As its name says it, a boutique paradise in the island, 28 Jr. SuitesÂ and 6 Master Suites where families, couples, groups of friends are welcome.

I went to bed satisfied of being in the Yucatan Peninsula, exploring a new destination that is trying to operate under sustainable practices with the help of Rainforest Alliance and now GreenSpot.

The last couple of days we had the pleasure of seeing another small Caribbean coastal town of Colombia. As you drive from Cartagena, the vegetation gets drier and drier to the point where cactus trees line the streets and it appears desert-like.Â  The rolling hills while not lush, are interestingly covered in cacti, a mountainous desert in a way.

We drove through the town of Barranquilla where preparations for the annual Carnival parties were going on. Since our trip was focused on diving, we did not stop here for the festivities but the carnival here is apparently one of the biggest in the world, just not as well know yet as those in places like Rio de Janeiro and Trinidad.

This part of the country is surprisingly quite undeveloped, with most houses being small wood-framed huts along the road.Â  The winding road took us up into the mountains and down over the other side to the small town of Taganga, near the one of the oldest ports, Santa Marta. Taganga is a tiny beach town with lots of dive shops and backpackers.

Diving here was different, it always amazes me each time I go under water and a different world appears. Here the visibility wasnâ€™t as great as San AndrÃ©s, but the coral was interesting. Huge rocks covered in different coloured hard corals and lots of different fish. The sea was pretty rough though and even though our instructor Max and his wife of Poseidon Dive Center took us out in a great fully equipped boat, the rocking back and forth on our way to the beach for lunch made me seasick!

We arrived at Tayrona National Park for an afternoon on a secluded beach where the Ecohabs are located. â€œEco Habsâ€ stand for Eco â€“ habitaciones (or Eco Rooms in English). They are huts built in the traditional indigenous style of the region, furnished with comfortable beds in white linens, hammocks looking out to the forest or the sea, stone and ceramic bathrooms and even a flatscreen and iPod docking station, all under a thatched roof and 360 degree wood-shuttered windows.

We had a delicious 3-course meal on the beach. At this ecolodge several trails through the rainforest can be explored with a naturalist to see monkeys and various endemic species of birds and other wildlife.Â  The lodge is run by solar power and has several other initiatives to make it the greenest accommodation in Colombia.

With that our two weeks in the Caribbean drew to a close. We were then off to BogotÃ¡ for the real work to begin â€“ the travel trade show â€“ and another chance to explore the capital city at its high and cool altitude of 2640m (7900 feet!).

I wanted to share some more underwater images from some of our dives so far. My favorite is the sting ray, such a graceful and gentle creature to watch up close. I love all the fish and corals and sponges. It’s another world. Enjoy the pics!

When I was a teenager I used to have a picture of an island in the Bahamas posted up on my wall, the perfect Caribbean island, with palm trees, soft pinkish coral sand, and beautiful turquoise water. This was my dream, I had to see something like this in my lifetime. Finally in my 22nd year I got to Jamaica for the first time, and was lucky enough to see some of the most beautiful beaches in the world. The water in Montego Bay, Port Antonio, and Negril left me speechless. My dream had come true.

Since then Iâ€™ve been to many tropical beaches in the Caribbean, Central America and South East Asia, and the turquoise water is still one of my favourite things in the world. Here in Providence, I have to say I have been privileged to witness a sea so beautiful I gasped and repeated over an over again, â€œThis is incredible!â€

A few pictures, while not quite doing it justice, at least give you an idea. They call it the â€œSea of Seven Coloursâ€ here because there are so many levels to the blues, aquas and turquoises. At Crab Cay, just a short boat ride from Providence we went up a short path to a lookout point on some rocks and had a 360 degree view of what I think is definitely some of the most beautiful water in the world.Â  Then we snorkeled around the small island and from the pictures it looks like we were on top of the world.

Back on San Andres we get a lesson in Rastafarian-style living. The word â€œItalâ€ pronounced “Eye-tal” while it might remind you of Italian, has nothing to do with it. It means â€œVitalâ€ and it is what describes the natural way of growing and cooking food in Rastafarianism. It is essentially organic methods of farming and preparing food without chemicals and synthetic fertilizers, the way our ancestors were doing it for centuries.

As I mentioned before there is a strong influence of Jamaican culture like other parts of coastal Latin America (Nicargua, Costa Rica and Panama) and we had the pleasure of visiting Job Saasâ€™ natural farm where he showed us the different fruit trees he grows as well as the endangered species he helps to protect and procreate such as various iguanas, black crabs and turtles.

Job Saas made us fresh Tamarind and cane juice and coconut cookies, sweetened from the sugar cane hand-pressed on his farm. Below he is pressing the cane, some of which we chewed on straight from the stalk, itâ€™s sweet and refreshing.

Job Saas really believes in his work and it was nice to be able to visit his place and show him support, as organic farming is not easy, but is so important. He knows nothing he produces pollutes the water or the air, and is naturally healthy for all who consume the fruits of his labors. So kind he is, he even gave me a book that was on display called How to Speak Caribbean English. The Creole they speak here is similar to Jamaican Patois (in fact I canâ€™t really tell the difference). The main difference is that Spanish is mixed in somewhat here, they say especially with the younger generation, as being part of Colombia means their education is in Spanish. Being completely captivated by language, I love to listen and pick out the roots of words and figure out what people are saying. Itâ€™s a lot of fun!

This part of our trip is over now, and on we go to one of the most historic and culturally significant cities in the world, Cartagena.