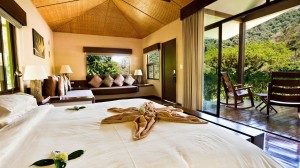 We received this lovely review from Winters C. and her family and thought we would share her kind words with you!

“Irene Edwards of Greenspot Travel arranged an amazing trip to Costa Rica for our family in July 2012. I contacted her to help me plan a trip for myself, my husband and our two girls, ages 10 and 8. After a couple of quick emails and a phone conversation, Irene had put together a fantastic 9 day trip covering all of the areas we wanted to experience.

We started in the cloud forest ( El Silencio, which was amazing) then spent a couple of days in the rain forest (Arenal) on our way out to Nosara at the Harmony Hotel. We have traveled quite a bit with our children, throughout the States and Europe, and my 10 year old said it was the best vacation yet!

Irene did a great job organizing multiple activities that were appropriate for all of us with companies that treated us like gold. Our drivers/tour guides were polite, informative and always on time. The hotels were fabulous ecolodges with great attention to detail and service. I have already recommended Irene to 2 friends of mine who are planning trips to Costa Rica.”

We are thrilled to share this review from Peter and his young family. If you’re thinking of bringing the whole gang on your GreenSpot vacation to Costa Rica, we can help plan family-friendly activities that everyone will enjoy.

Everything was arranged perfectly, and it seemed like every person be it driver, pilot, or hotel staff we came in contact with knew our next steps better then we did ourselves. The children went absolutely nuts over the wildlife we saw which included monkeys (all 4 Costa Rican species!) crocodiles, iguanas, macaws, toucans, coatis, just to name a few. The kids are ready to go back tomorrow and whenever we go, I’m sure we’ll be contacting Irene again.”

The Music of the Mysterious Spheres 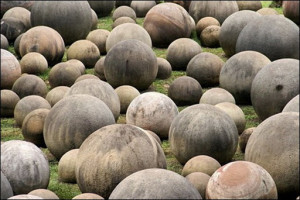 What’s big and round and hangs out in the ground?

Frankly, no one is quite sure, but about 300 of them have been found and  date back to 400 B.C.E. The mysterious (and strangely alluring) stone spheres of Costa Rica have been uncovered primarily in the southern Diquis Delta, with some found as far afield as the Isla Del Cano.

Made of a granite-like rock called granodiorite and topping out at two meters in diameter and 16 tons, these giant marvels raise more questions about ancient native cultures than their discovery has answered. Who made them? How were they made so precisely (some are 96% perfectly spherical) with what must have been rudimentary tools? How were they moved 25 to 30 miles from the sites where the rock was quarried? And the number one question – why were they made?

There’s no shortage of theories about the spheres. Local legends suggest that the makers had a potion that softened the rock, and that each sphere houses a single coffee bean. If you’ve ever had Costa Rican coffee, that might seem like a fitting tribute, or perhaps an obsessive level of attention to freshness. More recently, archeologists have noted the stones’ proximity to burial sites and theorized a memorial or spiritual significance.

Workers employed by the United Fruit Company were among the first in the modern era to discover the spheres as they cleared land for banana plantations, and those fellas were convinced the spheres were full of gold. Solution? Drill holes and blow the spheres to the heavens with dynamite. So much for treading lightly on the land. Some of the reconstituted victims of their handiwork can be seen at the National Museums in San Jose. Other people believed that the spheres made excellent garden ornaments (the sizes vary from a grapefruit to the behemoths already described), so an actual count of all of the stones has never been made, and preservation has been a struggle.

We’re fascinated by these monumental marbles, and we hope to draw attention to the work being done to study and protect the spheres in their original settings. GreenSpot.travel trips have included stops at a major excavation site with tours led by the archeologists leading the effort to understand the role (and the roll) of these uniquely Costa Rican wonders. Call or email us (info@greenspot.org) if you would like to learn more about including the spheres in your travel itinerary.

See GreenSpot.travel and the mysterious spheres in Conde Nast List of 32 Dream Trips 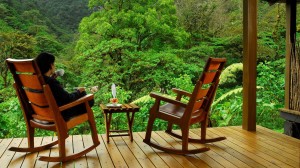 We LOVE hearing from our clients and wanted to share this review from The Phillips Family who took a GreenSpot vacation to Costa Rica. If you would like to share your feedback or trip photos, please email us!

I want to Thank You for putting together such a wonderfully organized trip together for us at such a short notice. Your selection of Hotels/Lodges, our Guides, the driver – Gerardo, all exceeded our expectations.

Also, grateful that you were able to make the adjustment to our itinerary at El Silencio Lodge.

We will definitely return to this beautiful country, and know who to turn to, for making our trip ‘smooth-sailing’, and simply amazing! Needless to say we will recommend you to our friends.